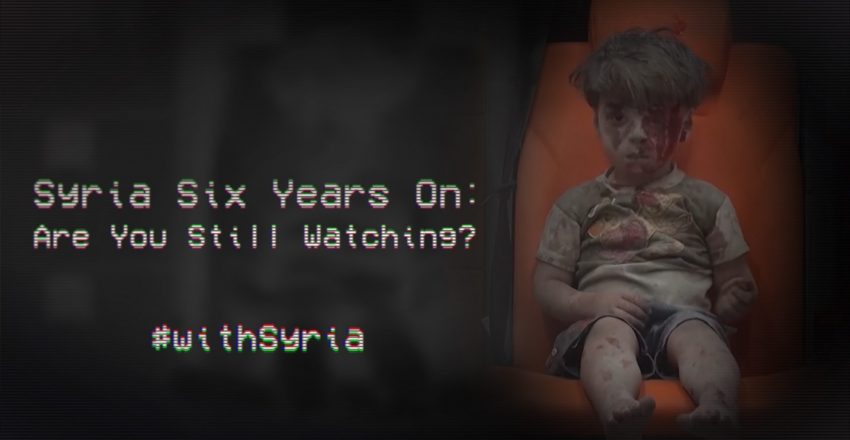 Ahead of the revolution’s sixth anniversary

Brussels/London/Paris, 13 March – European tax-payers’ money must not go to Syria’s government for reconstruction until an inclusive, durable transition is underway, an international coalition of more than 80 civil society organisations has said today, ahead of the revolution’s sixth anniversary on 15 March. [1]

The call comes ahead of a major conference to be held in Brussels on 4 and 5 April, at which European funding for the reconstruction will be discussed. The coalition called on European leaders to insist that not a single penny or cent for reconstruction will reach the Syrian government until:

“Without the credible promise of democracy, and an end to attacks on civilians, siege-warfare, torture and the criminalisation of civil society and humanitarian actors, there can be no transition worth the name in Syria,” said Dimitris Christopoulos, President of the FIDH, a partner to the coalition. “If European leaders neglect these conditions, they will be bankrolling continued war crimes and instability.”
Recently, the UN estimated that more than 600,000 Syrians are denied access to humanitarian aid by siege warfare, while the Siege Watch project puts this number at more than 900,000. More than 90,000 are forcibly disappeared or detained in prisons in which torture is rife. [2]
Jan Gruiters of coalition partner PAX, a Dutch peacebuilding initiative, said: “Russia has said it wants Europe to fund the reconstruction of Syria. Russia has also at last recognised that there is a moderate opposition. That suggests that Europe has leverage which – if used wisely – could help to energise the peace talks, and to create momentum towards a genuine, inclusive political transition, followed by reconstruction.” [3]

The call comes six years after peaceful protestors first took to the streets in Syria to call for freedom and reform. Despite a nominal ceasefire, civilians are dying due to aerial and artillery bombardment every day. Humanitarian access has worsened since the ceasefire begun on 1 January. [4]
Husam AlKatlaby, CEO of the Violations Documentation Centre in Syria, one of several Syrian partners to the coalition, said: “In Eastern Ghouta, where the regime is gradually cutting off the lifeline of 450,000 Syrians to the outside world, patients are already dying due to lack of medicine, food is becoming more expensive, and every day brings fresh casualties from conventional or chemical weapons. We fear that Eastern Ghouta will be the next of many more Aleppos yet to come – cut off, strangled, and bombarded while the world watches.” [5]
As part of the sixth anniversary activities, a hard hitting video will be released on 14 March, calling on European leaders to step up to the plate and forge the coherent Syria policy needed bring peace to the war-ravaged nation. The video is available here in English and here in Arabic.

This press release is supported by the following 81 organisations:

*These organizations are members of the Syria Relief Network (SRN), an umbrella organization of Syrian humanitarian NGOs working inside Syria and neighbouring countries to provide humanitarian assistance relating to the Syrian crisis.
Crisis Action coordinates civil society coalitions to protect civilians in conflict. Please note that it does not seek a public profile, and should not be quoted or mentioned in any media products.

CONTACTS
Interviewees from the coalition will be available to speak to the press in languages including English, French, Dutch and Arabic.

[1] In a separate initiative, several major international NGOs will be giving their social media accounts
over to members of Syrian grassroots civil society on 15 March, to amplify the voices of Syrians to
citizens of European nations. The takeover will use the hashtag #withSyria on Twitter. The participating
organisations will include Amnesty International, Islamic Relief, Oxfam, Physicians for Human Rights and Refugees International, as well as prominent individuals including Julian Reichelt, Editor of Bild Online (Germany), British television personality Mariela Frostrup, and Irish actor Robert Sheehan.