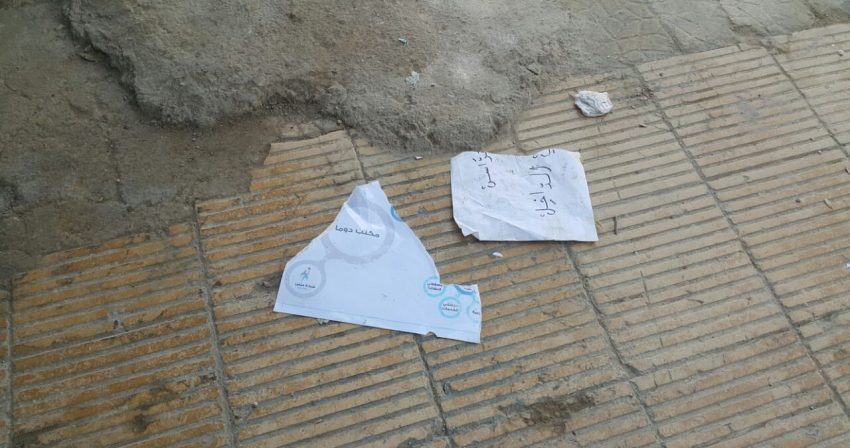 Attack on the offices of the civil society organizations in Damascus, Ghouta Summary of What Happened

In the early morning on Tuesday, March 7, 2017, a group of people took to social networks, calling for a demonstration in front of the offices of the Rising for Freedom Magazine, protesting an article published in Issue 86 titled “Carry me, Dad” by Shawkat Garzeddin, containing offensive sentences and blasphemy.

The estimated number of protestors was 70, and they initially gathered outside the magazine’s office. Other civil organizations are based here; they operate in Ghouta, in general, and Douma, in particular. When the protest developed into a direct threat of breaking into the offices, the police were contacted, but the police refused to intervene, claiming that “the police are unable to confront the street,” and they added, “we won’t be able to protect you or ourselves.” The police instead advised the employees to evacuate their offices.

At 4 PM, when the staff of the NGOs left, they encountered protesters with melee weapons. Soon after, a small group arrived with signs and tools for vandalizing, and they subsequently stormed the building, vandalizing furniture and office equipment, tearing down the NGOs’ signs and posters inside their offices. They wrote threats on the doors and outside the building before fleeing.

On the morning of March 8, 2017, a decision from the Prosecutor General in Douma was issued.  It read: “All offices of the Rising for Freedom Magazine, Horras Network for Child Protection, and any affiliated organization or magazine will be closed until they face a judicial hearing.”  The decision also instructed “to send a statement to the local administration in Douma to close the offices and seal them shut, and write a report” about the situation.

The editorial board of Rising for Freedom responded quickly, admitting the article contained offensive content and that publishing it was negligent. The editorial board removed the article from the magazine’s website and stopped distribution of the printed issue. They also published a clarification and an apology to the readers and the Syrians.  They assured readers that the article did not reflect the opinion of the magazine in any way, but the writer’s only.

What does that mean?

The decision gravely damaged the work of the involved organizations, as it suspended their daily work, which aims to support the resistance of Ghouta under siege and to continue to empower people to live a normal life despite the dire circumstances imposed by Assad’s regime and his open war against the people and society. The Development and Small Projects Organization offers job opportunities for the civilians inside Gouta, and Hurran Network provides educational and psychosocial support services to more than 18,000 children in Douma and Ghouta who live under violent conditions daily. In addition, the Violations Documentation Centre (VDC) works to preserve documents and archives for the victims, detainees, and martyrs.  The VDC tracks everything related to human rights violations, a difficult task in a complex and violence-stricken society.

The arbitrary decision issued this morning:

1- Is unjustified.  It is unfair for any party to attack other organizations, which were not even involved, either in the judicial decision or the offending article in the Rise for Freedom Magazine.

2- Clearly contributes to the empowerment of the siege on the people and the civilians by closing all the channels of services offered by those organizations, and thus places the population under the severe circumstances of siege and protracts the suffering imposed by the regime, which wanted to retaliate against the people who rose up, demanding freedom.

3- Enshrines the absolute military hegemony of the de-facto forces over society by preventing any independent initiatives that do not fall under the supervision and management of these forces.

4- Offers a flimsy image claiming that a group of organizations is connected, and portraying them as one unit, despite the fact that they are administratively and financially independent and do not follow each other.  They simply share the same building and offices and, as it happens, the years of struggle against the Assad regime that made some of our staff personal friends, outside of work.

How Do We View What Happened?

We are a group of peaceful, unarmed civil society organizations with no tools for conflict and confrontation other than the law and public institutions that offer an alternative to the Assad regime. Our organizations, as a whole, oppose the content of the article and consider it incompatible with our values and principles. We will do everything we can to confront this arbitrary decision through law, argumentation, and logic. We are aware of the incoherence in the de-facto authorities’ arguments and logic, which view any independent actions as merely enemies or competitors, and so begin attacking these independent initiatives, using convoluted and senseless methods to attack our colleagues and staff and threaten their livelihoods, sometimes through direct threat and sometimes through incitement and the evasion of responsibility.  We hold the military forces operating in the region responsible for the safety of our organization’s colleagues and staff in Douma and Ghouta. Recently, some leaflets were distributed in Douma, including death threats to our colleagues, without any reason or legal justification.

We won’t spare any effort to protect our colleagues in Douma, and closing this issue won’t be as simple as was opening it.

We emphasize the following:

1-  The immediate reopening of the concerned offices.

2- The immediate lifting of any threat against our colleagues and our staff on the ground in Douma.

3- The protection of our offices is the responsibility of the de-facto authorities, and the security forces directly bear responsibility for any attack against them (the judiciary, police, and military groups).

1- Syrian Center for Media and Freedom of Expression