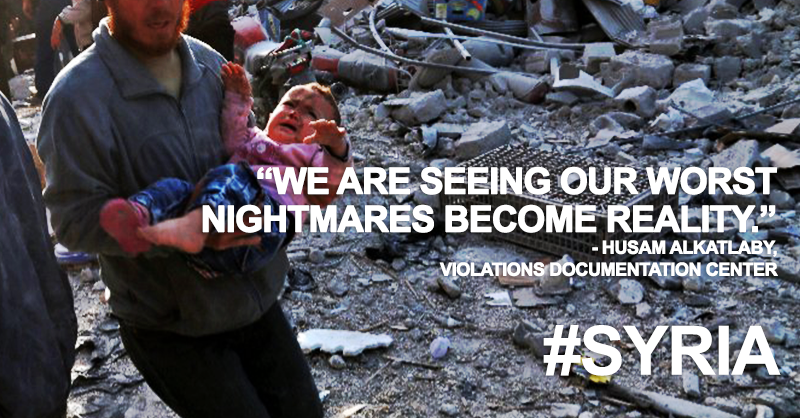 Save Our Syria:
[14 November 2017] A horrific attack on a crowded market in Atareb, Aleppo has killed at least 43 civilians, including women and children. The market, which was located within the Russian-sponsored de-escalation zones, was targeted three times on Monday by Russian and / or Syrian warplanes.  In response, Syrian civil society representatives are demanding an immediate UN-led investigation of the Arateb massacre and the imposition of new measures to protect Syrian civilians across Syria’s de-escalation zones. .
​
“In Atareb, we are seeing our worst nightmare become reality”, Husam Alkatlaby, CEO of the Syrian human rights monitoring group, the Violations Documentation Center, said. “Syrian civil society groups have long warned that Assad’s ultimate ambition was to drive Syrians from their homes, force them into small, densely populated areas, and then deliberately bomb them when they refuse to submit. The fact that the Atareb marketplace was targeted not once but three times indicates that this attack was pre-meditated, deliberate, and constitutes a war crime. It is vital that independent monitors investigate this attack thoroughly, and take all necessary steps to identify the perpetrators.”

“Sadly, the Atareb massacre is just the latest sign that Syria’s de-escalation zones are foundering.  If the international community is serious about lowering the death toll in Syria, then it cannot leave the monitoring of de-escalation agreements to the parties most responsible for violating them. It is incumbent on the international community to protect Syrian civilians across northern Syria and to take immediate step to break the sieges in eastern Ghouta.”
​
Syrian civil society representatives are calling for: