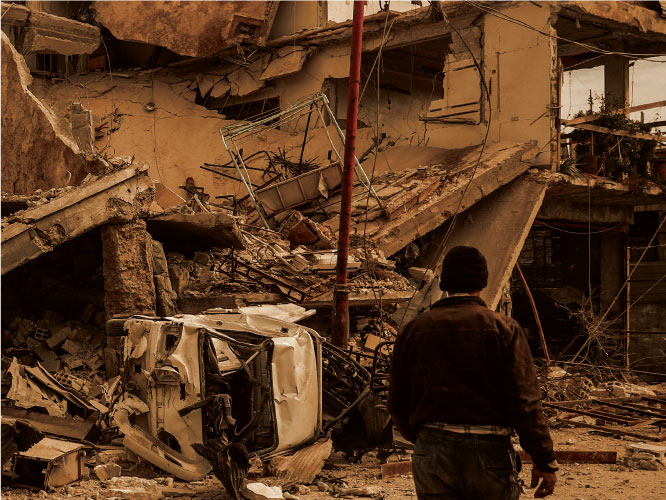 The Violations Documentation Center (VDC) has monitored the implementation of Security Council Resolution 2401, which was adopted unanimously by the members of the Council on February 24, 2018. The VDC clearly notes that none of the provisions of the resolution were implemented with the exception of the entry of the humanitarian convoy to the city of Douma on March 5, 2018.

1) The commitment of the parties concerned to the ceasefire during the said period:
I. Size and number of violations and distribution by region and perpetrators
II. Targeting of hospitals and medical staff
III. Use of prohibited weapons
IV. Numbers and statistics concerning casualties

3) Lifting of the siege on the areas and civilian communities:
I. Forced displacement

4) Number and statistics on casualties:
In this report, the VDC identifies violations of Resolution 2401 with regards to the above-mentioned points. In the case of “adherence to the cease-fire”, the VDC treats every single air strike or raid as one violation.
This report uses only data that the VDC was able to verify. Data that could not be verified was archived for possible future usage if it is verified.
The data contained in this report is not final and is subject to constant scrutiny, updating and follow-up by the database team at the VDC. In the case of death tolls and related statistics, the latest report is considered to be the most accurate.

1st:
The commitment of the parties concerned to a ceasefire for the duration of 30 days:

II. Targeting of hospitals and medical staff:
The VDC has documented 16 strikes on hospitals and medical staff throughout Syria. Most of the targeting was concentrated in Eastern Ghouta. The VDC recorded the direct targeting of Afrin hospital in Afrin city by Turkish warplanes on March 16, 2018.
“We shared the locations of 29 hospitals and medical points with UNOCHA on March 12th with both the Syrian and Russian governments, the Turkish government, and the Global Coalition against Daesh,” said Dr. Mohammad Kattoub of SAMS. “Then an airstrike targeted Arbin hospital on March 20th, a hospital whose location was shared. The hospital was targeted with a penetrating guided missile, which fortunately did not explode, but killed one patient inside the hospital.”

The VDC recorded a suspected use of prohibited weapons in 44 attacks between February 24th and March 26th. 545 barrel bombs were deployed by the Syrian Air Force on residential neighborhoods and civilian objects.

The VDC has recorded 9 suspected chlorine attacks, 28 suspected uses of napalm and 8 suspected white phosphorus attacks. The VDC had previously issued a detailed report on the suspected use of chlorine and napalm in the town of Al-Shayfouniya. VI. The numbers and statistics of the dead
From February 24, 2018 to March 26, 2018, the VDC recorded 1573 civilian deaths throughout Syria from a total of 1911 deaths. The civilian death toll includes 284 children.
Syrian government forces are responsible for the deaths of 1378 people, while the Russian government forces killed 148 people. Armed opposition groups killed 196 people. 2nd:
Since the issuance of Resolution 2401, the VDC has registered only one international aid convoy entry into Douma in two phases that took place on March 5, 2018 and March 9, 2018.

The aid convoy that entered Douma on March 5th was forced to leave the city hours after its arrival and before unloading its entire aid supply. The convoy then entered Douma again on March 9th to complete the unloading of aid supply.
No other aid convoys entered into Eastern Ghouta. The area was divided into three parts by military operations carried out by the Syrian and Russian government forces. As a result, civilians outside of Douma were not able to benefit from the convoy’s humanitarian aid. Douma hosts a large number of Internally Displaced Persons (IDPs) compared to other regions in Eastern Ghouta, having held 15,000 IDPs on the eve of the convoy’s first entry on March 5th. This rendered the convoy’s supply for the civilians of Douma insufficient.
The VDC documented Syrian government warplane and artillery attacks during the convoy’s presence in Douma on March 5th. The VDC also documented the direct targeting of the convoy on March 9th, which forced the convoy team to seek shelter with residents for a few hours and send appeals to the Syrian and Russian governments to stop the shelling.

3rd:
Lifting of sieges on areas and communities:
The sieges continued on all the areas besieged in Syria before the resolution was issued. The VDC did not record any total or partial lifting of the sieges. According to VDC documentation, the besieged areas in Syria are the following: *These areas are not included in Resolution 2401

The VDC recorded forced displacement in various areas of Syria that took place from February 24 to March 26 (See the infographic chart).  Movement was concentrated in two main areas: from Eastern Ghouta to the south and from the Afrin region to the north.