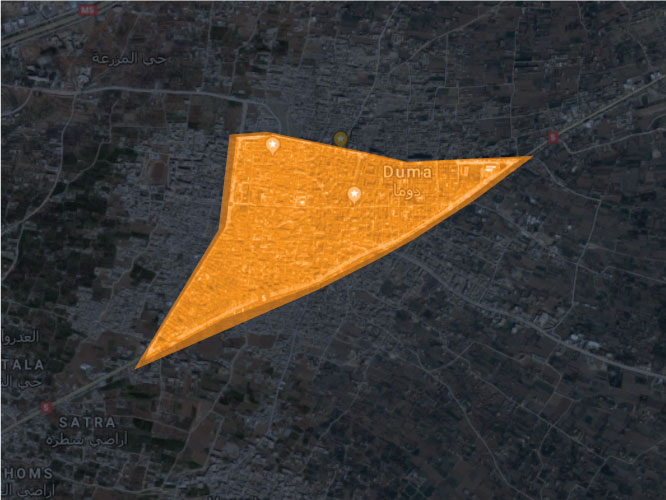 Saturday, April 7, 2018 at approximately 12pm: A Red Crescent center in Douma is targeted with two guided missiles and several barrel bombs. The center is immediately rendered out of service and ambulances are destroyed. The only remaining service for transporting the wounded in Douma is the civil defence. Syrian warplanes continue to drop barrel bombs that disrupt the travel of civil defense vehicles and rescue teams who are transporting the wounded due to lack of ambulance services.

Majed Kamel (pseudonym), a member of the Red Crescent in Douma, told the VDC:

“At around 12pm on Saturday, April 7, the Red Crescent center in Douma was targeted with two missiles via an air raid. The center went out of service completely and the ambulances were destroyed. These were the last ambulances available in Douma. We began to rely on the civil defence’s vehicles to rescue the wounded.”

“At the start of the chemical attacks, the smell of chlorine reached the center of the city of Douma. We could not determine the area where the chlorine rocket had fallen. Dead bodies were on the streets, the wounded were bleeding badly, and the medical crews were not sufficient for the large amount of cases.”

“We later discovered the bodies of people who had suffocated from toxic gases. They were in closed spaces, sheltering from the barrel bombs, which may have caused their quick death as no one heard their screams. Some of them were apparently trying to reach an open space because we found their bodies on the stairs.”

Saturday, April 7, 2018 at approximately 7:30pm: The Syrian air force targets Martyrs’ Square near the Numan Mosque in Douma with an airstrike suspected to have contained poisonous gas.

Dr. Jamal Rafie (pseudonym), told the VDC that the symptoms that he saw on patients “do not resemble chlorine attack symptoms. Chlorine alone cannot induce such symptoms because while it does cause suffocation, it does not affect the nerves. There were symptoms indicative of organic phosphorus compounds in the sarin gas category. But the smell of chlorine was also present in the place.”

Dr. Mohammed Kuttoub from the Syrian American Medical Society (SAMS) told the VDC that his colleagues in Eastern Ghouta saw symptoms on people that include: “pinpoint pupils, slow heartbeat, slow breathing, heavy foaming from the mouth and nose, and the burning of the cornea in some cases.” The Violations Documentation Center (VDC) suspects that this attack was deliberated to inflict as much possible damage on civilians. The Syrian government effectively made it very difficult for the resident population to reach ambulances and rescue teams, forced residents to seek shelter from heavy barrel bomb attacks, and then carried out airstrikes suspected to have contained poisonous gas.  The VDC notes that such an attack scenario has been repeated in circumstances where chemical weapons have been used, and which includes the VDC’s recent documentation of the suspected chlorine and napalm attack on the town of Al-Shayfouniya.

The Chemical Weapons Convention (CWC) that was signed by the Syrian government in September 2013 prohibits the use of toxic chemicals, such as chlorine, to kill or injure. Furthermore, international humanitarian law and laws of war applied in Syria prohibit the use of chemical weapons and consider the use of prohibited weapons, whether intentionally or recklessly, to be a war crime.

The VDC calls on the United Nations, the Human Rights Council and the Office of Humanitarian Affairs to seriously consider these violations of UN resolutions, international law and the CWC. Furthermore, the VDC calls for an independent international investigation to consider the recurrence of these violations and to take all necessary steps to protect civilians in Syria and to provide them with all needed assistance in their places of residence.

We urge countries to take all necessary steps to ensure the protection of civilians, including acting together outside the UNSC as this entity has proven ineffective when it comes to ensuring that IHL is upheld in Syria.